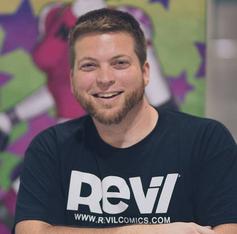 About the creator of Revil:  Caesar started in comics in 2007 while in college, he began doing color work for Marvel comics on Spider-Man and The Fantastic Four comics. Since then he has graduated with a degree in Graphic Design and done work for a huge list of world known companies from billboards to cd designs and more. That led him to create a magazine called The Dead Timez that featured world famous bands, artists, films, and more.

After a five year run on The Dead Timez and hitting the east and west coasts and world wide recognition from the heartland, he began a family and decided to put the magazine to rest and continued his passion of comic books back up and created Revil Comics in late 2014. Today Revil has been continuing to strive to put out the best in indie comics with team ups of other talented artists, writers, letterers, colorists, cover artists, and more.

With talent fromMarvel, Image, BOOM!, Action Lab, DC Comics,  and more including other Indie companies. We are able to put our best foot forward in each and every new project... From design work to comics. 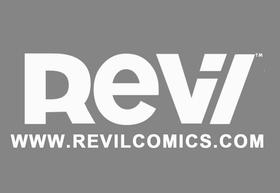 Based out of Springfield, MO.

our past SPEAKS loud and proud!

we believe in delivering the best we can as artists, creators, and writers.